ADAM STRANGE FUTURE QUEST SPECIAL #1
DC COMICS (W) Marc Andreyko & Various (A) Steve Lieber, Phil Winslade (CA) Evan “Doc” Shaner
After the events of the DEATH OF HAWKMAN miniseries, Adam Strange is blasted through multiple dimensions only to land on Earth! There, instead of super-powered beings and legendary crime fighters, he encounters a boy adventurer and his scientist father – and they’re the only ones who can help him return home. Jonny Quest, Hadji, Dr. Quest and Race Bannon have a plan, but it’s going to involve a dangerous trek through Dino Boy’s Lost Valley of prehistoric threats! And in the backup feature starring Top Cat, breaking out of prison is challenging enough for a cat, but sometimes it means stumbling through a cosmic portal to planet Earth… and right into the hands of Batman! 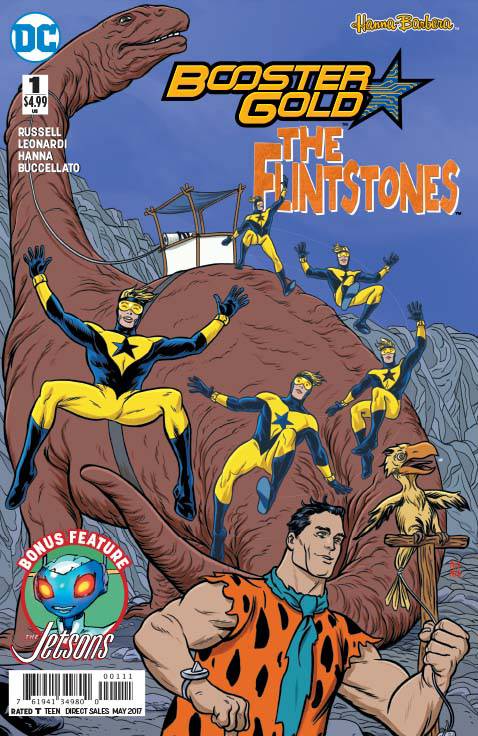 BOOSTER GOLD FLINTSTONES SPECIAL #1
DC COMICS (W) Mark Russell & Various (A) Rick Leonardi, Scott Hanna (CA) Michael Allred
Welcome to the 25th century, where the Earth is a polluted post-industrial nightmare, most animals are extinct, and reptilian aliens are invading cities across the planet! In their time of need, the world’s citizens turn to the time-traveling Booster Gold to save the day. To learn why these aliens are seeking revenge, Booster dives deep into the prehistoric past to see what happened the last time they hit the planet. In this bygone era, Fred Flintstone and Barney Rubble must help Booster learn the truth and return to his own time armed with the information that will bring down the invaders – if Booster can convince them to help him. No problem – we all know how persuasive Booster can be, right? Right?! And in the backup feature starring The Jetsons, in a new twist on an old twist about our future, The Jetsons live in a world of robotics and gadgetry. But how does dying change when grandma’s brain can be digitally imprinted onto a housecleaning robot? 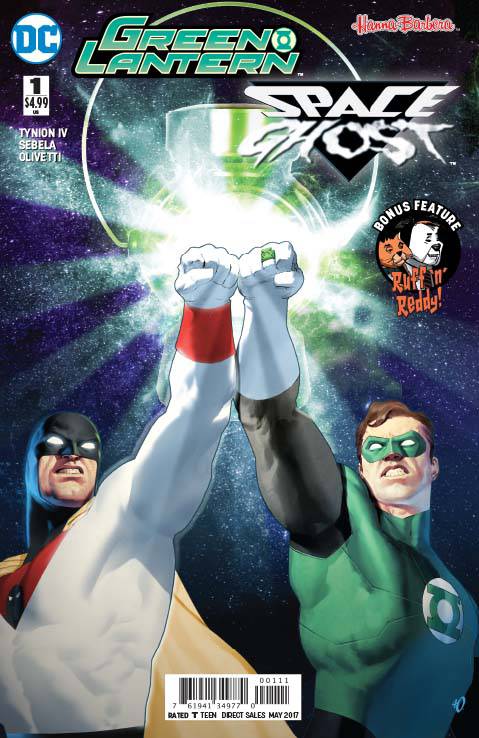 GREEN LANTERN SPACE GHOST SPECIAL #1
DC COMICS (W) James TynionIV & Various (A) Howard Chaykin, Ariel Olivetti (CA) Ariel Olivetti
Trapped in a strange rift in time, Green Lantern and Space Ghost are forced to battle a variety of foes – and each other! And even if they manage to survive, they will be thrown into a world with no concept of interstellar travel – or even what an alien is! Stripped of their weapons by a xenophobic culture, the duo will have to battle to regain them – but what happens when Space Ghost dons the Emerald Ring and Hal Jordan put on the Power Bands? And in the backup feature, Ruff and Reddy were once the toast of nightclubs, variety shows, late night chat fests and Broadway. Learn how they became the comedic duo of yesterday… before they hit rock-bottom today! 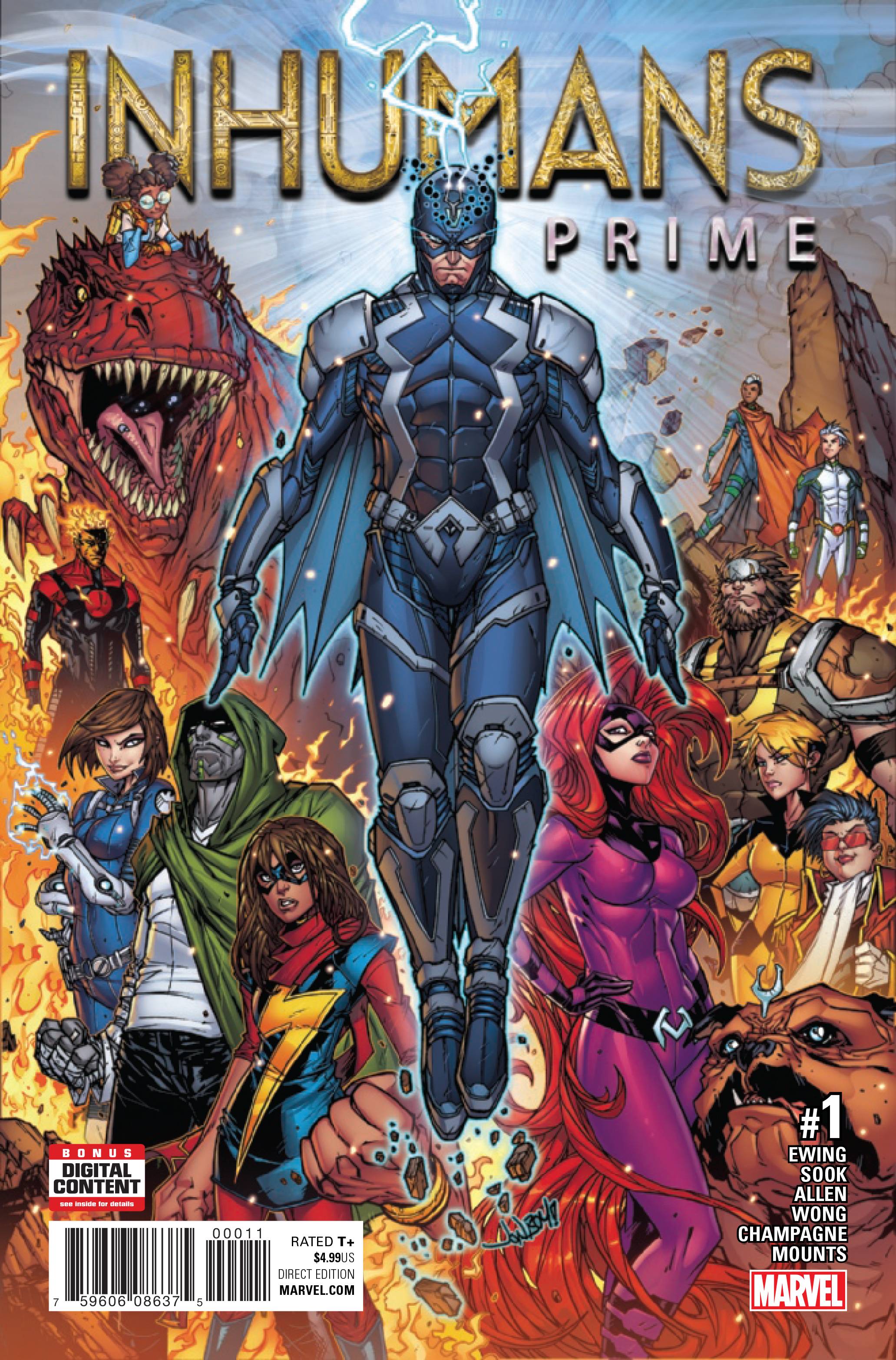 INHUMANS PRIME #1
MARVEL COMICS (W) Al Ewing (A) Ryan Sook (CA) Jonboy Meyers
RESURRXION BEGINS HERE!
In the wake of the awesome events of IVX – what will become of the Inhumans? In this oversized special issue – the trial of Maximus! The coming of Marvel Boy! And what is the dark secret of Black Bolt? A special bridging issue between the past of the Inhumans and their future – on Earth and in the stars! Rated T+ 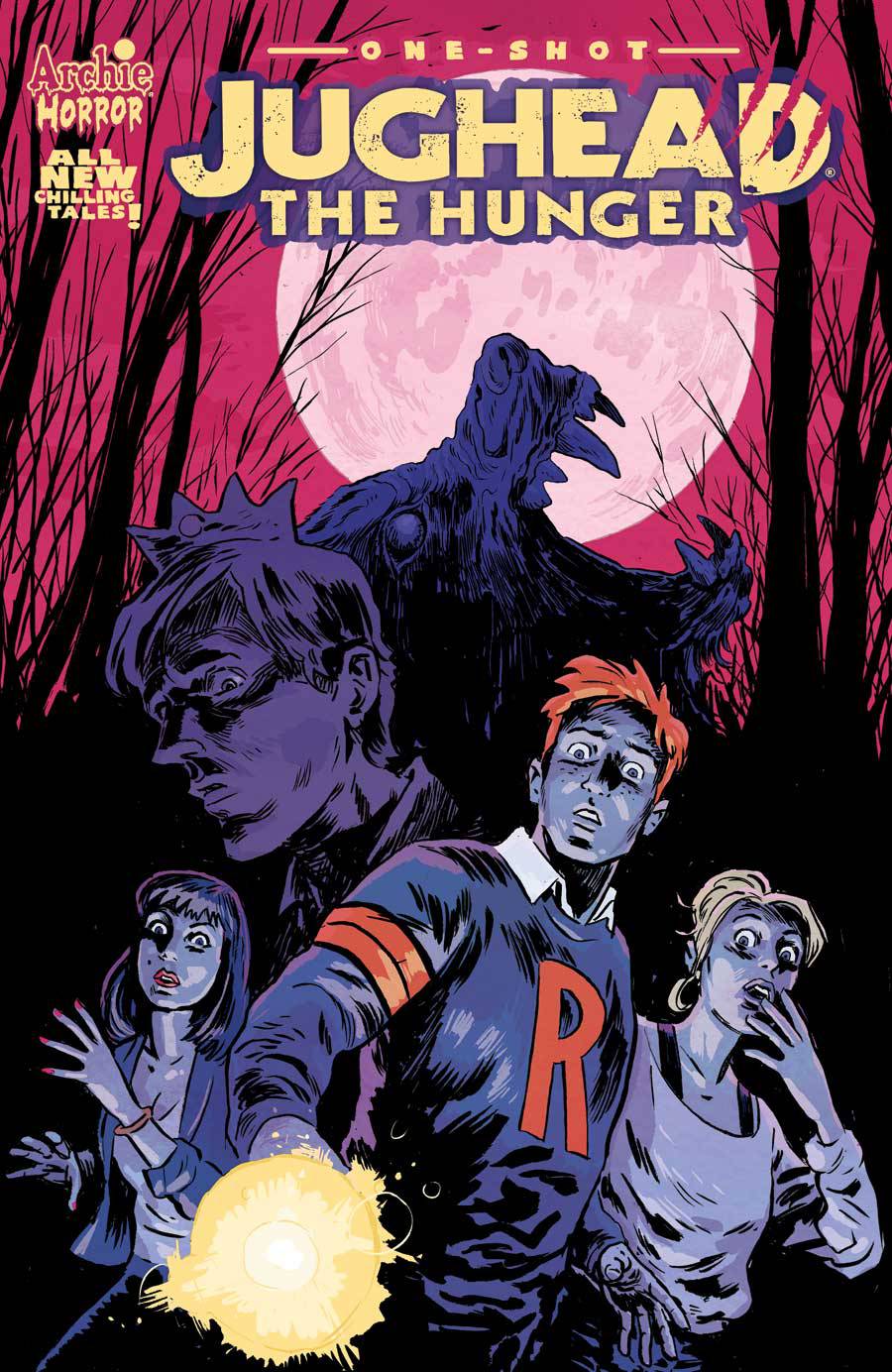 JUGHEAD THE HUNGER ONE SHOT
ARCHIE COMIC PUBLICATIONS (W) Frank Tieri (A/CA) Michael Walsh
Brand New One-Shot Special! Jughead Jones has always had an insatiable appetite… but what if his hunger came from a sinister place? When a murderous menace is on the prowl, taking the lives of some of the most well-known and esteemed inhabitants of Riverdale, Jughead and his family’s dark legacy comes to light. Join writer Frank Tieri (Wolverine) and artist Michael Walsh (Secret Avengers) for this horrifying one-shot for TEEN+ readers. 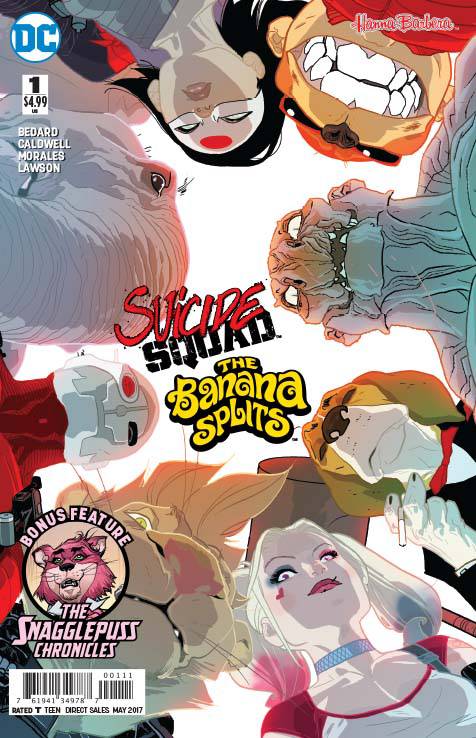 SUICIDE SQUAD BANANA SPLITS SPECIAL #1
DC COMICS (W) Antony Bedard, Mark Russell (A) Ben Caldwell, Dale Eaglesham (CA) Clyde Caldwell
“SUICIDE SPLITS”! Mistaken for metahumans, thrown in the bowels of Belle Reve, the animal rock band Banana Splits are recruited by Amanda Waller for a secret mission: to save the Suicide Squad! What follows is the weirdest team-up you never thought you’d see! How can Fleegle, Bingo, Drooper and Snorky stand up to Harley, Deadshot, Katana and Croc?! And in the backup feature, Snagglepuss is a Southern gothic playwright working with an ensemble cast of cultural figures, exploring an intensely creative time in the New York City theater scene of the 1950s… 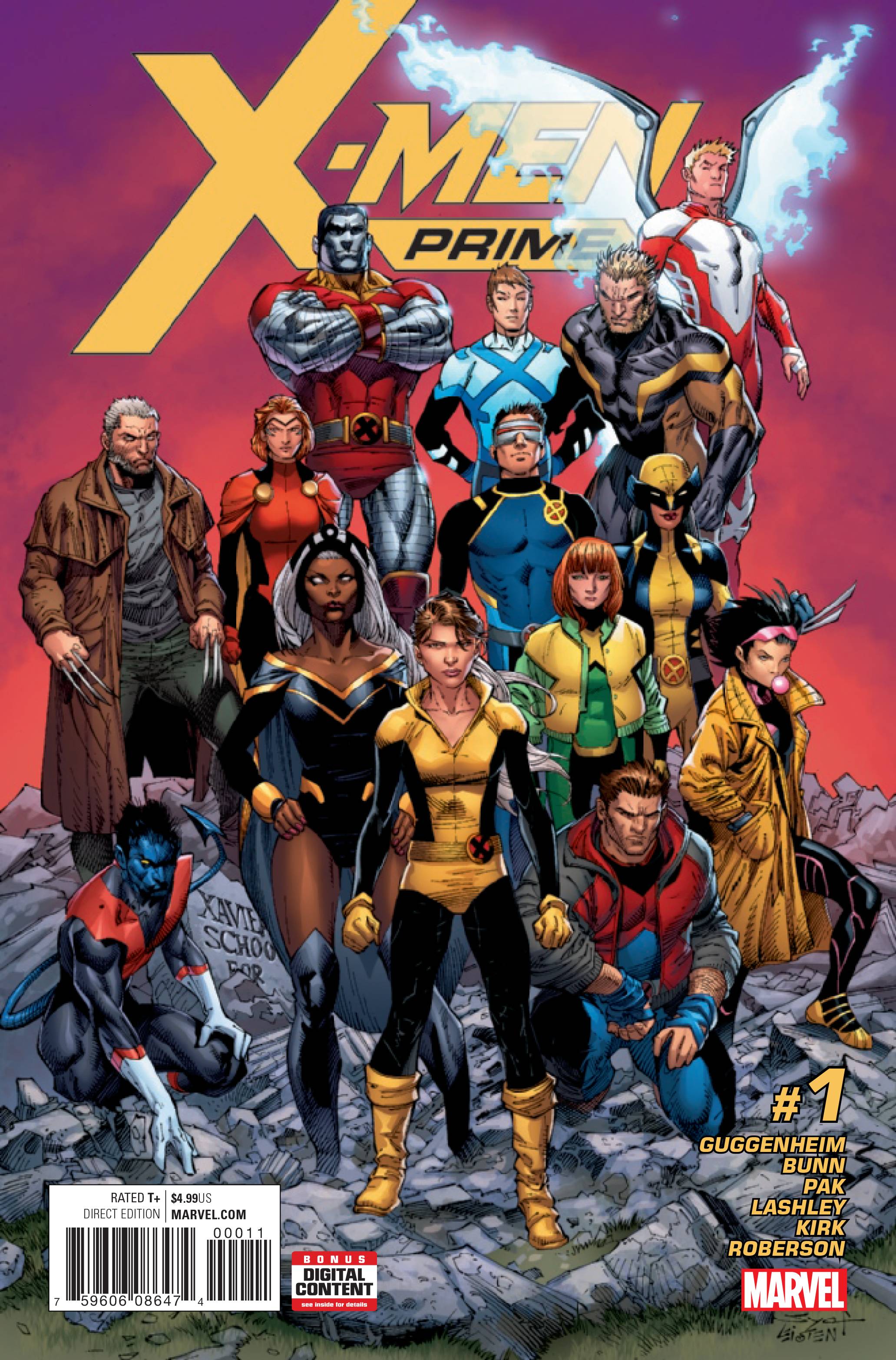 X-MEN PRIME #1
MARVEL COMICS (W) Marc Guggenheim (A) Ken Lashley & Various (CA) Ardian Syaf
RESURRXION BEGINS HERE!
In the wake of their war with the Inhumans, the X-MEN are at a crossroads. Where do they go from here? Luckily, one beloved X-Men has the answer to that question: Xavier’s dream comes full circle as KITTY PRYDE returns to the X-Men, ready to lead them in their mission to protect a world that hates and fears them. The next chapter of the X-Men’s saga starts here! Rated T+

CHARMED #1
D. E. (W) Erica Schultz (A) Maria Sanapo (CA) Joe Corroney
Balancing work, witchcraft, and a life is never easy, and the Charmed Ones are stretched too thin. Meanwhile, a demon in the Underworld rallies the troops with a plan to take out the Charmed Ones forever.

AMERICA #1
MARVEL COMICS (W) Gabby Rivera (A) Joe Quinones
At last! Everyone’s favorite no-nonsense powerhouse, America Chavez, gets her own series!Written by critically-acclaimed YA novelist Gabby Rivera (Juliet Takes A Breath) and drawn by all-star artist Joe Quinones (HOWARD THE DUCK), Marvel Comics’ brand new AMERICA series shines a solo spotlight on the high-octane and hard-hitting adventures of the one and only America Chavez! END_OF_DOCUMENT_TOKEN_TO_BE_REPLACED

ELEKTRA #1
MARVEL COMICS (W) Matt Owens (A) Juan Cabal (CA) Elizabeth Torque
CASINO BATTLE ROYALE!
Running from her tumultuous past, ELEKTRA attempts to lose herself in a vibrant sea of neon, noise and anonymity: LAS VEGAS. But how long can a former ninja assassin really hope to escape the vortex of violence that encompasses her life…especially when there’s a new player in Sin City that has her in his sights for his newest game? Enter: Arcade.
Rated T+ END_OF_DOCUMENT_TOKEN_TO_BE_REPLACED

CURSE WORDS #1
IMAGE COMICS (W) Charles Soule (A/CA) Ryan Browne
“THE DEVIL’S DEVIL,” Part One
The new ongoing series from CHARLES SOULE (Daredevil, Death of Wolverine, Star Wars) and RYAN BROWNE (GOD HATES ASTRONAUTS) is COMING FOR YOU! A wizard has appeared in New York City, and he’s casting wonderful spells, getting famous, getting rich-it’s great! But it’s not. This wizard has everyone fooled. He is actually an EVIL WIZARD, and EVIL THINGS are on the way. CURSE WORDS is a gonzo modern fantasy, full of darkness, light…and MAGIC. END_OF_DOCUMENT_TOKEN_TO_BE_REPLACED

CAPTAIN AMERICA STEVE ROGERS #1
MARVEL COMICS (W) Nick Spencer (A/CA) Jesus Saiz
As the saying goes, you can’t keep a good man down—especially Steve Rogers, the original Captain America.
When the villainous Iron Nail removed the Super-Soldier Serum from his body, Steve Rogers aged into an old man, putting him on the sidelines and passing his shield to the former Falcon, Sam Wilson. But following the events of the upcoming Standoff event, Rogers will once again fight on the frontlines as Captain America, with a new shield, a new mission, and a brand new comic, Captain America: Steve Rogers.

DC UNIVERSE REBIRTH #1
DC COMICS (W) Geoff Johns (A) Gary Frank & Various (CA) Gary Frank
It all begins here. Do not skip to the last page. Do not let a friend or message board ruin this comic for you. The future (and past) of the DC Universe starts here. Don’t say we didn’t warn you! THEY SAID IT: “Rebirth is about focusing in on the core of the character and their respective universe,” says writer and DC Entertainment Chief Creative Officer Geoff Johns. “It brings back what has been lost, the legacy of the characters, the love and the hope of the DCU!” END_OF_DOCUMENT_TOKEN_TO_BE_REPLACED

CIVIL WAR II #0 (OF 7)
MARVEL COMICS (W) Brian Michael Bendis (A/CA) Olivier Coipel
From the creative team that brought you House of M and Siege comes a blistering first chapter in Marvel’s new explosive event. Watch as the players are introduced and the table is set for a storyline that fans will be talking about for years. His name is Ulysses – a new Inhuman with the ability to profile the future. His emergence sends shockwaves through the Marvel Universe. Will they use his power to alter the future and control their destinies? Or will they reject it – and allow tomorrow to unfold without interference… Rated T+  END_OF_DOCUMENT_TOKEN_TO_BE_REPLACED

4001 A.D. X-O MANOWAR #1
VALIANT ENTERTAINMENT LLC  (W) Robert Venditti (A) Clayton Henry (CA) CAFU
ROCKETING OUT OF THE PAGES OF 4001 A.D…the present and future of Valiant’s #1 hero come together for an essential standalone chapter at the heart of the summer’s blockbuster comics event! How did the rise of Earth’s most powerful hero lead to humanity’s ultimate destruction? Just what was the War of the X-O Manowars…and how did its catastrophic fallout bring ruination and despair to a besieged planet?
END_OF_DOCUMENT_TOKEN_TO_BE_REPLACED

ALIENS DEFIANCE #1
DARK HORSE COMICS
(W) Brian Wood (A) Tristan Jones (CA) Massimo Carnevale
Battling demons from her past while fighting for her life, Colonial Marine Private First Class Zula Hendricks, in the company of Weyland-Yutani synthetics, is forced to question her strength and loyalty when the discovery of an insidious alien species on a derelict hauler sends her on a dangerous journey across the stars.

END_OF_DOCUMENT_TOKEN_TO_BE_REPLACED

4 KIDS WALK INTO A BANK #1
BLACK MASK COMICS (W) Matthew Rosenberg (A/CA) Tyler Boss. A fun(ish) crime caper about children! Eleven-year-old Paige and her weirdo friends have a problem: a gang of ex-cons need her dad’s help on a heist… the problem is those ex-cons are morons. If Paige wants to keep her dad out of trouble, she’s going to have to pull off the heist herself. Like Wes Anderson remaking Reservoir Dogs, 4KWIAB is a very dark & moderately humorous story about friendship, growing up, D & D, puking, skinheads, grand larceny, and family. END_OF_DOCUMENT_TOKEN_TO_BE_REPLACED