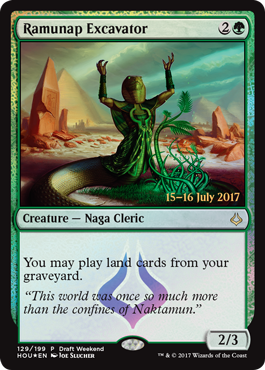 Starting July 14 and continuing all weekend, you’ll be able to pick up and play with new Hour of Devastation cards. For playing in the event, you will receive an alternate-art promo card (while supplies last).

Come on out for some FRIDAY NIGHT MAGIC!
Registration: 6:00pm
Deck Construction: 6:30pm
What is Draft Weekend?

Set Name: Hour of Devastation
Block: Set 2 of 2 in the Amonkhet Block
Number of Cards: 199