Coming this Friday May 25, two brand spanking new event decks from Avacyn Restored. The blue and white deck: Humanity’s Vengeance and the all black deck: Death’s Encroach. Both at the amazing price of $26.99! 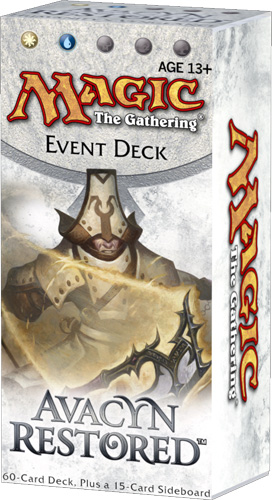 Humanity’s Vengeance, the deck that will get the most out of all your creatures, working in unison towards a common goal….VICTORY!

This blue and white deck comes with Nearheath Pilgrim and Tandem Lookout, cards that will make your creatures combined like Voltron with the mechanic called soulbound. And if you have a creature that is being targeted by your opponent, use Nephalia Smuggler to place your card in temporary exile for safe keeping.

Worried about expansive spells and creatures that cost four or more mana? Then Mana Leak and Negate are perfect sideboard options. 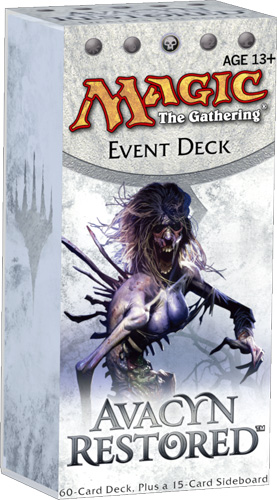 Like death metal from Norway, comes the aggressive all black deck, full of zombies and other fiendish creatures that will surely panic your opponent.

Use Diregraf and Gravecrawler as your shock troops, and Lashwrithe will make any of your creatures more vile and deadly. And since this deck focuses on playing and destroying creatures, your sideboard is full of discard like Distress and Despise.

Skinrender has the touch of toxin, putting three -1/-1 on any fiend that is entering the battlefield.